Over the past few weeks, my two young boys have really taken a liking to my old G.I. Joe toys that I played with way back when I was a kid in the 80’s. Remember that patriotic tune “G.I. Joe, A real American Hero!” Well over thirty years later, those cartoons and action figures still strike a chord with the instincts of young boys. I have to admit, it’s a lot of fun to reminisce on the memories I had with those toys and eagerly waiting each week for the next episode to air on a Thursday (or whatever day it was). Back in the day, if you missed it – you missed it. Unless of course, your dad was vigilant enough to set the living room VCR to record the episode for you… right next to the part of the tape where he previously recorded Eye On L.A. with Chuck Henry or This Old House on PBS.

Nowadays, you can binge all seven volumes of the G.I. Joe cartoon on Amazon for $19.99 per season. So far we’re up to volume four. While watching every single episode in strict succession, besides getting the general entertainment out of it, I noticed some correlations begin to develop in my mind.

It took me a few episodes to sort my thoughts through the fog of daily life and general exhaustion, but by the time episode three | volume four streamed before my eyes, it hit me. The self-proclaimed president-elect Joe Biden bears striking similarities to the Cobra Commander!

Now let’s not get ahead of ourselves here. I’m not talking about physical similarities, although we never know what the Cobra Commander really looks like under that mirrored face shield. The only thing we can say for sure is that he’s white. So is Joe. So you can go ahead and check that box off if you want. But one thing’s for sure… Cobra Commander is one buff dude, knows how to use a gun and doesn’t appear to be needing a cane to walk any time soon.

Yet that’s where the differences end. We always say actions speak louder than words, so consider the following points matching Joe Biden and the Cobra Commander: 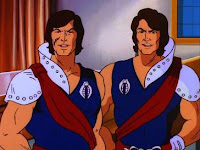 So yeah, I'm just sayin'...
There are likely other examples, but I’ll leave that up to whoever wants to throw hate mail at me after this one. And by the way, if you’re offended by this do everyone around you a favor and stop being such a cry baby.  If you get mad at this little blog post, you've got bigger problems in your life, dude.

Oh, one more thing. All these images are the property of whoever owns G.I. Joe. Hope that’s good enough for the lawyers with a hair up their…
Posted by Nick Zgradic at 5:04 PM No comments:

Don't Panic. We're Getting Back to Work.

Say what you will and call it what you will.  Regardless, this thing has been staring us in the face for a few weeks now here in the US.  As of the date of this writing, the president is putting out hopeful messages that American workers can get back to business by Easter 2020 or better.  Yet on the same day, the mayor Los Angeles is out there saying the city of LA would be in lock down for months to come.

OK everyone, I'm not going to get into an exhaustive analysis as to who's right and wrong and for what reasons they may have.  What I will simply say is that while I firmly believe the steps we've taken as a society currently to combat this virus should be applauded and we need to continue to be diligent in our continued approach, we also need to get back to work - period.  ESPECIALLY in Los Angeles by the way, where so many of my colleagues, customers, vendors and FRIENDS have been immediately affected in horrible ways.  That includes myself.  Right now, I'm OK, but I know more than a handful of folks who aren't right now.  The whole town got shut down.  That's not right.  Keeping our town shut down for months isn't realistic.

With that said, I wanted to post the following tract that I think is beautiful and thoughtfully written.  I posted it on my Facebook page earlier today too, but I wanted these words to be on a more permanent tableau.  I don't know who the author is, but I'd like to meet them, because in my view they hit the nail right on the head.  This was sent to me via text message a few days prior by a friend.  He passed it on to me, and now I'm passing it on to you.  This town will get back to work again - soon.

In theatre we have a tradition - whenever the theatre is empty we are always sure to leave one light on. Typically on a stand in the center of the stage, this light is known as the ghost light. There are many stories about its origin- but it’s meaning is unmistakable.

It means though the theatre is empty, WE WILL RETURN. So here’s to us. The actors, the technicians, the directors, the carpenters, the designers, the dancers, the teachers, the students, the freelancers, those on tour, those at sea, the electricians, the stitchers, the makers, the stage managers.... THE ARTISTS.

Many of us have taken big hits during this virus. Financial and emotional weights have come crashing down as our entire industry is reduced to nothing but a bunch of ghost lights. But those ghost lights are temporary place holders. They are a sign. We might be down now- but our passion, our creativity, our drive is still center stage. We’ll be unplugging those ghost lights in no time. Until then- here’s a ghost light- to let the world know we will be back.
Posted by Nick Zgradic at 12:11 AM No comments:

Another Reason Why I'm Proud to be a Valley Boy

Wow... I've got a little extra air in my chest and spring in my step tonight.  Yes.  I was just informed by my local 11 o'clock news (which I rarely watch, but everything happens for a reason) that the three most dangerous intersections in Los Angeles are right smack in the middle of the grand district of Van Nuys, CA.

It just so happens that I spend A LOT of time driving through this part of town, and indeed these intersections.  Drum roll please, here they are:

1) Coming in at the top spot with 47 crashes last year (2019) is the beautiful intersection of Sherman Way and Sepulveda Blvd.

3) And last but not least is the intersection of Sherman Way and Woodman Ave.  Hmm... Are we seeing a pattern here?  Yes we are!   Because... This intersection is also in Van Nuys!  Woo hoo!  Number of crashes at the number three spot?  That would be 40.

Doing the math brings us to a total of 130 crashes last year in 2019.  Now this begs the question, why does Van Nuys hold this title in a city as large and sprawling as Los Angeles?  I'm not quite sure.  That part of town is generally pretty mellow, although if you go out looking for trouble, you'll probably find it.

But beyond that, one reason could be the exorbitant quantity of strip clubs and billboards advertising those strip clubs at virtually every single corner; above the guy with the paper sign begging for cash who's there in the same spot... literally every day.

And speaking of that guy, maybe it could be the spectacle of the sheer quantity of homeless encampments, also on every single corner.  And not just in Van Nuys, by the way.  I personally get a kick out of seeing virtual garbage dumps and homeless communities just down the block or around the corner of a $2 Million per home neighborhood in Hollywood and surrounding areas.

Or it could also be because half the population here in Van Nuys is pretty much stoned all the time.  Seriously, you can't drive down the street with your window down for more than 45 seconds without catching the vapors from some a-hole's mobile hotbox while cruising down Oxnard Street... Oh yeah, where there also happens to be another strip club and two pot dispensaries... One of which used to be a bicycle shop.  My how people's priorities change.

A lot to look at and watch out for.  Too bad people aren't watching out for the stop lights instead.

Posted by Nick Zgradic at 11:38 PM No comments:

Come on everybody out there, who’s with me?  I'm not making any bones about it... Particularly because I don't want bones in my chicken.  It’s high time that Chick-Fil-A puts everyone’s secret favorite on the menu.  This is the beginning of the great march towards getting the diet-busting American gourmet dish at a drive-thru near you!

I’ll let my letter to Chick-Fil-A do the talking in order to kick this thing off.  In my view, this is an absolute duty on the part of chick-Fil-A to bring their flavor and convenience to our passenger seats while stuck on the freeway.

Why don't you have chicken and waffles? Seriously? You need to have chicken and waffles. You can put it in a box so you can pick, dip (in syrup) and eat while in the car on the freeway. You could even make your own sandwich with the chicken and waffle bits out of the box, then dip and then eat THAT while you're driving on the freeway... Or around town. You know. Look I just don't have the time to call in and wait to pick up at Roscoe’s every time. I have to drive to Hollywood to do that. I live in Sherman Oaks. You know what that means? I need to drive up and over the hill, through traffic to get to Gower and Sunset. Not the easiest thing to do my friends. I mean seriously, have you ever done that on a regular basis? It's rough. At any rate, there are more Chick Fil A's than there are Roscoes', so please send me a coupon... Or two, when you guys launch this thing because that would really help me out. Now excuse me, I need to go fill up the tank so I can make it to Hollywood. See you in a couple of hours...


REPLY FROM Chick-Fil-A!  We need more comments to keep this momentum going!

Thank you for taking the time to contact Chick-fil-A.  You are very important to us and we appreciate you sharing your thoughts with us.

Chick-fil-A is fortunate to have many loyal customers. Many of these fans take the time and effort to inquire about sharing their own ideas about ways they wish to see us improve - whether it is adding a specific new product, service or feature. We are grateful for our customers' intent, and this motivates us to work even harder to keep improving. Unfortunately, it is our corporate policy not to accept or consider any unsolicited creative ideas. This is a difficult decision because we realize that by following this policy, Chick-fil-A may miss out on some great ideas from our customers. We would rather miss out on some of these ideas than to risk any potential future misunderstanding should Chick-fil-A develop or already have developed a product, service, or feature that may seem similar to a customer's idea. We hope you will understand the reasons for our policy. You can view our Unsolicited Ideas Policy at ____ for more information. Beyond this policy, we gladly welcome customers' feedback about their restaurant experiences.

Again, thank you for your time and interest in Chick-fil-A.


Posted by Nick Zgradic at 3:02 PM No comments:

The guy who's world you're living in right now:

Check out all my other sites. La Mejor Version De Mi.